Is Serial Murder a Result of Addictive Thinking?

Pre-meditated serial murder is the choice of very few, but therein lies the question: is it a choice? Some researchers have suggested that criminal behavior and the act of serial murder could in fact be a result of addictive thinking, with similarities to behaviors seen within substance addiction.

As a society, we assume individuals who commit brutal murders must be insane, mentally ill to the extent they are not fully in control of what they were doing and need help. This however is not always the case.

There are many examples of individuals and couples who have chose to kill, often repeatedly, because they wanted to. Ted Bundy, Paul Bernardo and Karla Homolka (The ‘Ken and Barbie’ Killers), John Wayne Gacy and Fred and Rosemary West are just a few.

Reference to serial murders being addicted to murder is certainly not new, but has received relatively little direct attention. Television and film regularly refer to addiction when portraying multiple murders. The film ‘Addicted to Murder’ for example was first released in 1995 based around a vampire who was addicted to killing and must continue to maintain his ‘fix’ of violence.

The TV series ‘Dexter‘ has been running since 2006 portraying a blood spatter analyst who is compelled to kill perpetrators of crime who are not adequately punished by the legal system and is unable to stop himself from doing so.

Potentially, repeated criminal offences may be due to an individual finding the feelings and emotions gained from this behavior addictive and therefore repeatedly returning to this pattern. While alcoholics battle the cravings for alcohol and struggle to resist these urges, an offender may have a similar relationship with criminal activity and behaviors.

Abusers of substances often appear to show little interest in the consequences of their abuse as they are too caught up in the hold of the substance has over them.  Furthermore for some, even though they are aware continued use of the substance is extremely detrimental to them, they continue using. Equally some criminals show a similar disregard for the effects of their criminal behavior and the consequences for themselves should they be caught.

Some enjoy the chase, the thrill of committing an act they know they are not supposed to and getting away with it.

The case of Dr. Harold Shipman, who murdered up to 250 of his patients between 1975 and 1998 is one example and has been reviewed by a number of researchers who have referred to his ‘addiction to killing‘.

Substance and Non-Substance Based Addiction

We are familiar with addiction in terms of alcohol and drugs and the physiological changes in the body that ingestion of such substances causes.  The characteristics of addiction include a cycle of stages ranging from craving through withdrawal to relapse, characterised by the term ‘addictive thinking‘. 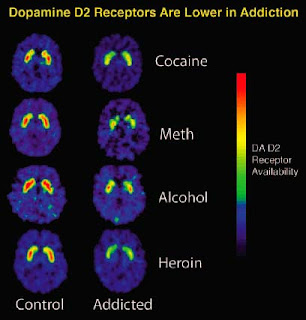 Research has shown that many addictive drugs affect our brains reward system by releasing more of the neurotransmitter dopamine.  Dopamine is involved in learning, motivation, emotion and importantly pleasure.

Dopamine increases in our brain reward system which gives us the feeling of pleasure.  It is believed drugs can cause an increase up to 10 times that of natural rewards such as food, and the brain has to try and compensate by reducing the amount of dopamine receptor cells at the synapse connection, therefore reducing the amount of dopamine that can enter the reward system.

The brain then becomes less responsive to the drug which is why higher doses are needed for individuals to achieve the same level of pleasure i.e. they become tolerant to the drug. The more a drug is used, the more the brain becomes familiar with it and adapts to account for it.

Areas outside of the reward system are also affected with some areas reducing the numbers of neurons and others increasing the number of neurons producing more connections.  In this way brain areas responsible for decision making, judgement, memory and learning can all alter under continued drug use.

This suggests an individual can only really become addicted to something that is substance based with addictive properties. However, that is not the case and addiction is not all physical.

There is a large contribution from psychological factors such as stress, fear and anger.  Research has shown that addiction to behaviors and actions, rather than substances is quite possible and is become an increasing problem, for example gambling.

Similar characteristics have been found where an individual experiences cravings for the excitement of feelings induced by the behavior in question. They suffer withdrawal symptoms of stress and mood changes when they are unable to indulge in this behavior. They build up a tolerance level where they need to take bigger risks to achieve the same euphoria and suffer relapses when trying to refrain from the behavior.

Addiction and Addictive Thinking – How Does It Work?

Such characteristics mirror those experienced when addicted to substances leading to the suggestion that people can indeed be addicted to a non-substance based activity.

These addictions have become known as ‘process’ addictions and have expanded traditional understanding of pharmacological addiction to something that is not solely physical, but an integrated illness encompassing biological, psychological and social aspects.  This does lend support to the idea that criminal behavior could become addictive for some individuals.

Some criminologists have highlighted certain behaviors seen by serial killers which can be related to the behaviors of substance addicts.

Helen Morrison and Harold Goldberg for example in their book ‘My Life Among The Serial Killers‘ published in 2005, review a number of well-known cases such as Peter Sutcliffe, Fredrick West, and John Wayne Gacy, exploring their personalities and behavior through a series of prison interviews.

The authors note that contrary to popular belief, mental illness and an abusive childhood are not necessarily present in all cases of serial murder or should they be considered as criteria for why an individual may go on to murder.

They conclude by presenting a theory where due to such environmental factors not being a conclusive cause for murderous behavior, genetic predisposition must be the main factor and indeed this behavior is an addiction.  They also theorize that serial murderers have never fully progressed psychologically from infancy, they do not have the same values of right and wrong and have developed a need to kill as a result.

This has proved to be a controversial theory, mainly attracting criticism for unsubstantiated claims not based on evidence, however it is still an interesting one.

Crime and the Addiction Cycle

Serial murder is a continuation, a progression which few of us understand.  Addiction is a complex issue encompassing both physiological and psychological factors.  Every person is different and while there may be common characteristics within addiction across substances or activities, each individual experience will be personal to them.

If gambling, with the thrill of winning, the risk of losing and the knowledge of potential dangers can be become an all-encompassing addition, it seem quite possible that criminal activity could be the same.

Committing criminal acts and serial murder does not cost money. It does not require a constant stream of funds to allow it to continue in that way that gambling and substance misuse requires.

People can engage in such behavior without losing their jobs, their house and their relationships as long as they don’t get caught.

This may be part of the attraction. Getting away with it, not being caught and being able to continue with normal everyday routines.

If indeed some perpetrators of crime are in a addiction cycle, this has potentially serious ramifications for treatment and rehabilitation.  With regards to serial murder, the possibility of addiction playing a part for some opens and interesting avenue for understanding such behavior.

This article was written by and originally appeared on Crime Traveller.

A fascinating look inside Ted Bundy’s 1968 VW Beetle that was integral to both his murders...

Did you know that there are seven psychological phases a serial killer goes through in his mind...

Studies had shown that prison can be a violent place, filled with potentially dangerous offenders...

Death is inevitable. There is no escaping it. We are all going to die at some point; some will die...

Most horror movies are suspenseful enough on their own. However, there is one aspect that makes...

From Ted Bundy to the BTK Killer, here are 7 most chilling phone calls made by serial killers. The...

Behind the Tape Photobook

Hundreds of crime scenes. Nearly a thousand never-before-seen crime scene photos. The true horror is hiding behind the yellow tape.

From Ted Bundy’s Issaquah dumpsite to Jeffrey Dahmer’s apartment, Behind the Tape is a must-have for every true crime buff.

Did you know that Ted Bundy was a member of a crime prevention task force for the state of Washington, where he authored a pamphlet instructing women how to prevent rape?

200 pages of little-known true crime facts you may have never heard before!

From the death row inmate who sued the state for botching his execution, to a bank robber who gave the cashier his full name and address, 365 Days of Crime is this summer’s ULTIMATE true crime treat.